‘This is the story of Horemheb, general in the army of the pharaoh, who later became pharaoh himself. From a young age on, I was very jealous of the noble people, the pharaohs themselves. They were arrogant. They put themselves above the people. I came from a lower family. And at the same time I was very proud of my simple, my lower background – and also envious of their high status. I wanted to become like them. I was very ambitious to become like them and in the end I made it to become pharaoh myself. Trying to bring back the connection between the people and the high rulers of Egypt.

So this duality in me created my life and the things that I have done, which I regret at this day, because many people have suffered as well as I. Because the curse that I have spoken out backfired on me a thousand times. So I know what suffering is, speaking in this late hour of history.

I cursed the followers of Aton. I didn’t like what they did to the people. In their arrogance they created a new religion, under the reign of Achnaton, who was maybe the worst of all. Everybody had to leave their own gods, their own shrines, their own rituals, their own power. To follow a religion that was so abstract and so incomprehensible, based on very soft principles of love and connection and family life. I sensed that the whole masculine power was denied. But also the power of the priest was denied. So both the military and the priesthood became redundant.

This was what I wanted to restore. So when the love between Achnaton and Nefertiti diminished as I knew through my spies, I sensed that I had an opportunity to make my move. First of all Nefertiti herself. I tried to lure her into different thoughts. I spoke to her and we became more intimate. This resulted finally in the secret relationship between us. Which was just my plan, because it would diminish the power of Achnaton, the black pharaoh, with his great lips and his long and arrogant head.

I cursed the followers of Aton and this curse went on for generations. Cause we were trained to use magic. White magic ór black magic. It didn’t matter in that time. We were trained to make curses last for eternity. So when the followers of Aton regrouped in the Israelian people, the Jewish tribe, under the leadership of Moses, I cursed Moses as well. He left with his tribe, leaving chaos in Egypt, murdering my oldest son, during the time when I was pharaoh. I tried to follow him far into the desert. But he knew how to trick us, through his spells from the old times. Many of my chiefs and commanders were drowned in the sea and Egypt was left behind in chaos, with all the curses of animals: frogs, grasshoppers, etcetera, etcetera. It was good they were gone. Later, in later incarnations, I followed them on, always persecuting them till the end of time.

That time has come now. In the time of the Jewish uprising, I was the general in the Roman army who followed the Essenes and the Jews up till the place of Massada. I ordered them to be sued in the Temple of Jerusalem and to break down Jerusalem till the last stone, because they knew how fanatic these believers of Adonai were. In the one God.

In a much later incarnation, in the World War II, I was Himmler. Trying to finally erase the Jewish people from the Earth. This was the curse of Aton, that has been held on till this time.

I have been affected by this curse, shriveled down in consciousness. I became black, black as coal. And my body shrivelled in a mummy, in which I was holding this curse.

Now is the time for forgiveness, because I can see my own part in it. My own lack of self respect and self worth. I can see now that my anger towards the House of Aton came forth from the lack of belief in myself.’ 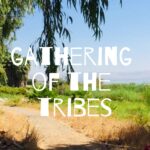